In a major announcement, Rolls-Royce has confirmed it will completely phase out internal combustion engines and switch to an electric-only vehicle portfolio by 2030. At the unveil of its first production electric vehicle (EV), named the Rolls-Royce Spectre, company CEO Torsten Müller-Ötvös said that by the end of this decade, the luxury marque will “no longer be in the business of producing or selling any internal combustion engine products.” This decision mirrors that of Rolls-Royce’s rival-in-chief, Bentley, which is owned by the Volkswagen Group and has also committed to having an all-electric portfolio by 2030. The all-electric Rolls-Royce Spectre will be launched in 2023. Image: Rolls-Royce

The world has also gotten its first glimpse of the two-door, fastback-style Rolls-Royce Spectre, which is said to be based on the same ‘Architecture of Luxury’ as the Phantom sedan and Cullinan SUV, and will have nothing in common with any existing models from parent company BMW. Rolls says the Spectre showcased today – which does look a lot like the now-discontinued Rolls-Royce Wraith – is not a prototype but the ‘real deal’, and confirmed deliveries of the Spectre will commence globally sometime towards the end of 2023, so it’s quite likely that the super-luxury EV will make its world premiere sometime in 2022 or early in 2023. The Spectre will be tested for over 2.5 million kilometres; note fastback-style silhouette. Image: Rolls-Royce

The Spectre will be subject to what is “the most demanding testing programme in Rolls-Royce’s history”, in the words of Müller-Ötvös. Testers will begin on-road trials shortly and will cover over 2.5 million kilometres in the Spectre, said to be akin to over 400 years of use for a Rolls on average, all over the world. 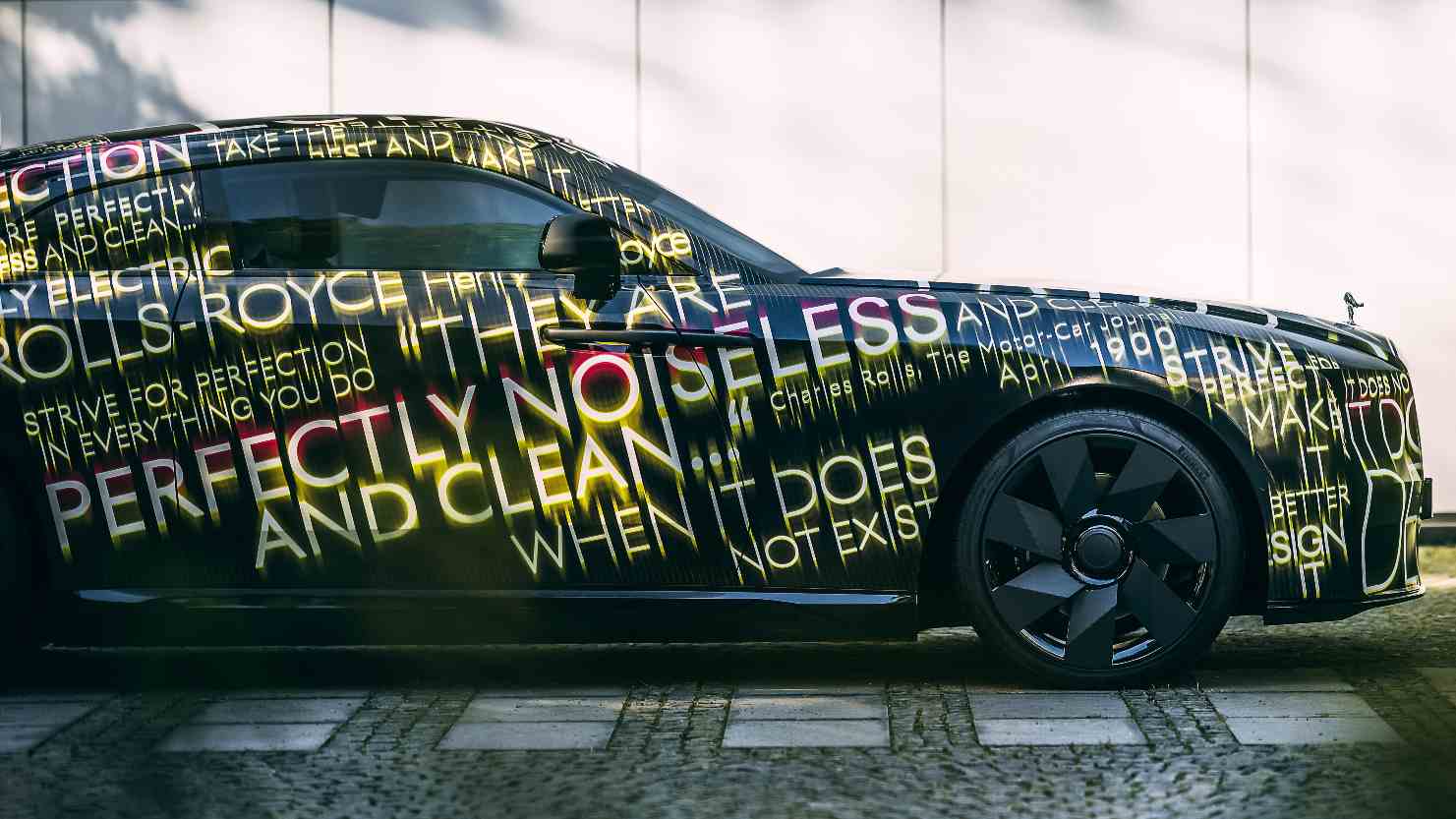 The Spectre runs on aero-focused alloy wheels and has suicide doors. Image: Rolls-Royce

Quotes emblazoned all over the camouflage on the Spectre previewed today means design details are neatly hidden, but you can expect to see a fresh take on the iconic Rolls ‘Pantheon’ grille as well as the Spirit of Ecstasy mascot. The Spectre in the official pictures runs on rather cool-looking aero-focused alloy wheels, has a hunkered-down stance, suicide doors, prominent side skirts and taut surfacing.

No specifications have been shared at this time, but it’s almost certain that Rolls will opt for nothing less than the best electric powertrain around, so Spectre buyers don’t miss the soon-to-be-discarded twin-turbo V12 petrol engine. Müller-Ötvös went so far as to say that electric powertrains are “uniquely and perfectly suited to Rolls-Royce Motor Cars, more so than any other automotive brand.” This is true to a certain extent, as Rolls-Royces are expected to be eerily quiet but also have a stunning amount of power on tap. Expect to see a fairly large battery and a multi-motor setup with the production-ready Spectre.