As India continues to push new energy vehicles in a bid to transform transportation in the country, Union minister Nitin Gadkari has announced the government will issue an order to all vehicle manufacturers – including those operating in the mass-market as well as premium segments – making flex-fuel engines mandatory for their vehicles in the next three to four months. Speaking at the stone-laying ceremony of a flyover in Pune, Gadkari said he hopes to see demand for petrol and diesel fall as more motorists switch to using vehicles powered by locally-produced ethanol.

” I have a wish. I would like to stop the petrol and diesel use in the country in my lifetime and our farmers can give the alternative to this in the form of ethanol. I am going to issue an order in the next three to four months, in which carmakers – from BMW, Mercedes to Tata and Mahindra – will be asked to make flex engines,” said Gadkari. All vehicle manufacturers – including those in the premium segment – will have to offer flex-fuel engines for their vehicles in India. Image: Ford

Flex fuel, or flexible fuel, is an alternative fuel made of a combination of gasoline and methanol or ethanol.

Even two-wheeler manufacturers will be asked to work on flex-fuel engines for their scooters and motorcycles, with Gadkari saying he has asked Bajaj and TVS to not approach him until they have made progress on this front, according to PTI. Interestingly, TVS did launch an ethanol-powered variant of its Apache motorcycle – named the Apache RTR 200 Fi E100 – in 2019, but was made available in only three states: Maharashtra, Uttar Pradesh, and Karnataka. 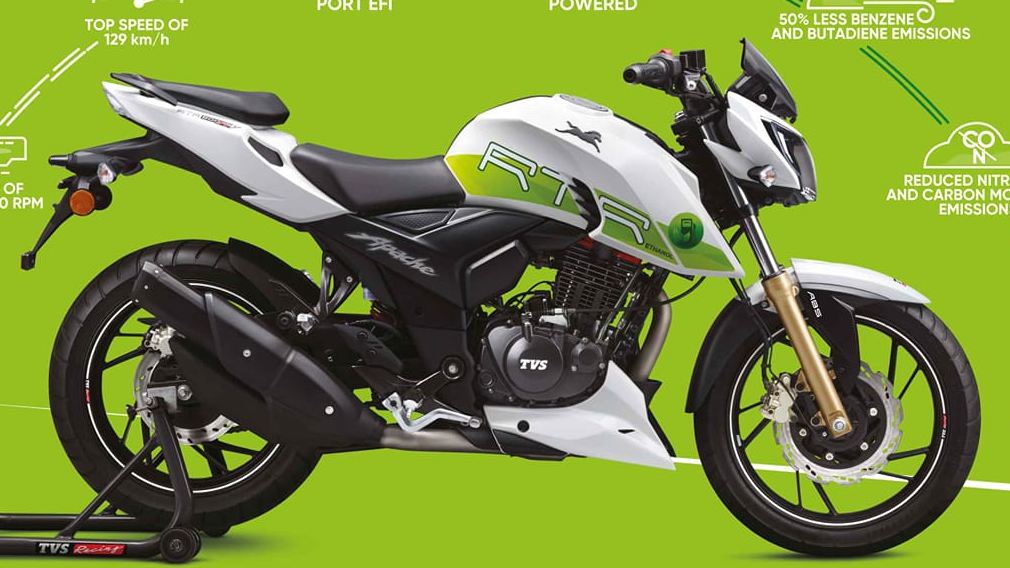 TVS had introduced an ethanol-powered Apache in 2019. Image: TVS

“I would like to ask you (Ajit Pawar) to take up the work of setting up multiple ethanol pumps in Pune as well as in western Maharashtra districts as it would help farmers and the sugar industry,” he said.

The target date for achieving 20 percent ethanol blending with petrol in India has been advanced to 2025, in a bid to cut pollution and reduce import dependence.

Gadkari has previously said ethanol is a better fuel than petrol, and it is an import substitute, cost effective, pollution-free and indigenous. He had also mentioned the use of ethanol as a fuel would boost the Indian economy because India is a “corn surplus, sugar surplus, and wheat surplus country”.

Recently, Gadkari had urged vehicle manufacturers in India to stop the production and sale of diesel vehicles, and instead make the switch to alternative fuel technologies.

With inputs from PTI

Also read: What is ethanol blending in petrol?