I usually start a review by discussing where the gadget stands in the company’s line-up. However, I won’t for the Realme Narzo 30 5G, because I have no clue where this handset fits in Realme’s grand scheme of things. What I do know, however, is that the Narzo 30 5G has almost the exact specifications of the Realme 8 5G.

To truly understand that, first you should be able to differentiate between the Realme 8, Realme 8 Pro, and the Realme 5G. Once you get that right, try not to mix up the Narzo 30, Narzo 30 5G, Narzo 30 Pro, and Narzo 30A Phew! I review smartphones for my bread and butter, and yet, I find it tricky to wrap my head around this. I’m not sure if the average consumer will be able to keep track. Anyway, that’s a topic for another time. For now, let’s put the Narzo 30 5G through its paces and find out if it is worth your money.

For the Narzo 30 5G, Realme has recycled the X7 Max 5G’s design. That said, it is a sleek unit, so I’m not complaining. Both devices have a curved back and a rectangular camera that stands out. It is the ergonomics department where the device reveals its budget roots. The Narzo 30 5G is 9 mm thick and at 194 grams, it is a bit heavy for a plastic phone.

The phone has minimal branding, which is a welcome change. It features a reflective stripe on its back, which Realme likes to refer to as racing-inspired “V-speed Design”. It may not be everyone’s cup of tea, but surely adds character to an otherwise subtle design.

It features a reflective stripe on its back, which Realme likes to refer to as racing-inspired “V-speed Design”. Image: Tech2/ Chandrakant Isi

Moving onto the front, the phone has fairly thin bezels, save for the chin. The punch-hole that holds a selfie camera is quite large. However, that’s alright considering that most budget phones still ship with a conventional notch. The volume rocker has a proper tactile feel. The recessed Power/Lock button also doubles up as a fingerprint scanner.

Budget handsets cut corners to keep their price in check. For the Narzo 30 5G, Realme has decided to save money in the display department. Instead of going with the AMOLED screen found on the Realme 8, the Narzo 30 5G settles for a 6.5-inch IPS (In-Plane Switching) display. Due to the inherent limitations of LCD technology, you miss out on deep blacks and vibrant colours.

Instead of going with the AMOLED screen found on the Realme 8, the Narzo 30 5G settles for a 6.5-inch IPS (In-Plane Switching) display. Image: Tech2/ Chandrakant Isi

The Full HD+ screen is quite sharp with its pixel density of over 400 ppi. The panel is tuned for a 90 Hz refresh rate but it doesn’t appear smooth, probably due to the panel’s slow pixel response time. For more details, read the display section of our Poco X3 Pro review.

The punch-hole that holds a selfie camera is quite large. Image: Tech2/ Chandrakant Isi

According to Realme, the Narzo 30 5G’s display has a peak brightness of 600 nits. However, I doubt this claim, given the phone’s struggle to maintain legibility under sunlight.

The Narzo 30 5G runs Android 11 with Realme UI 2.0 on top. As far as budget phones are concerned, Realme offers one of the best user experiences. The Chinese company has managed to squeeze in an incredible number of features while keeping the UI neat and clean.

Interface elements such as icons, the notification shade, and transparency effects are tastefully done. Moreover, the sheer number of customisation options is phenomenal. You can choose app drawer layout, alter icons, choose fonts, and switch to dark mode with ease.

The Realme UI 2.0 is optimised and runs smoothly most of the time. However, you can notice a bit of jitter when scrolling a webpage. The device comes with pre-loaded apps such as Realme Link, Browser, Soloop, HeyFun, HeyTap Cloud, and Community. Even if you don’t use them, these apps get on your nerves with a constant barrage of notifications. Thankfully, you can remove or disable most of these apps.

Surprisingly, despite favourable benchmark scores, the Narzo 30 5G can only run Call of Duty: Mobile at ‘Medium’ graphics and frame rate settings. The Realme 8, on the other hand, doesn’t break a sweat running COD at ‘Very High’ graphics quality and ‘Very High’ frame rate.

The Narzo 30 5G comes with 6 GB of RAM, which is probably the only thing that separates it from the Realme 8 5G that’s available in 4 GB and 8 GB RAM variants. Speaking of RAM, the Narzo 30 5G offers a virtual RAM expansion feature that allots a part of internal storage to memory. While this may sound like a good idea, you realise it is just a gimmick once you find out the speed disparity between the slow UFS2.1 storage and LPDDR4X RAM.

The phone offers dual SIM 5G connectivity, which unfortunately can’t be tested in India yet. The rest of the features such as 4G VoLTE, dual-band Wi-Fi, Bluetooth 5.1 with LE support, and GPS work as they should.

The Narzo 30 5G comes with a fairly loud mono speaker, which is fine for games and YouTube videos. The phone doesn’t ship with earphones, but if you connect it to a decent pair, the device’s output is good.

The Narzo 30 5G sports a triple camera setup comprising of a 48 MP sensor accompanied by a 2 MP depth and 2 MP macro sensor. The phone lacks a wide-angle camera. Considering the phone’s price category, the colours and resolved detail seem fine. However, the software-based sharpening effect is harsh for my liking. The camera offers 2X and 5X digital zoom modes, which are of little real use, since you lose detail.

In low light, the camera doesn’t capture much detail. On the bright side, it does a good job with colours and dynamic range. Ironically, I got better results with the AI mode compared to the dedicated night mode. This is probably because the night mode keeps the shutter open for a longer time and I don’t have steady hands.

The 16 MP selfie camera is very good. Considering its size limitations, the colours and sharpness seem fine. My only gripe is with the subject separation, which is a hit-and-miss affair. 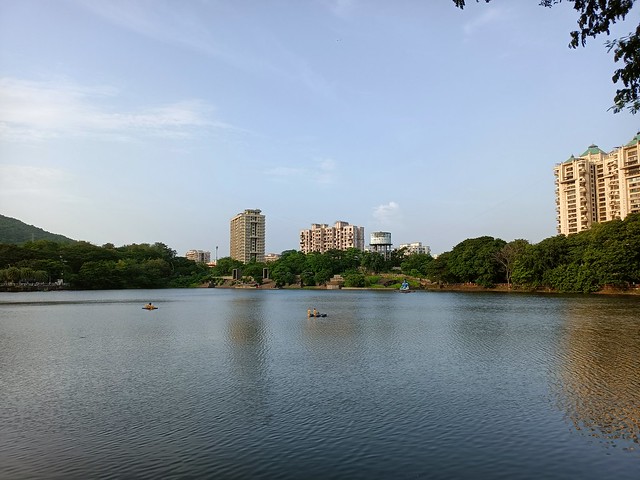 Moving onto video recording, the 1080p at 30 fps is the best the Narzo 30 5G can offer. Much like the still images, you get a decent amount of detail in video clips. It lacks OIS (Optical Image Stabilisation), but the software-based EIS (Electronic Image Stabilisation) helps if you are fine with a cropped frame.

The Realme Narzo 30 5G pack-in a large 5,000 mAh battery. With the display set to a 90 Hz refresh rate and roughly 50 percent brightness, the handset clocked in 14 hours and 27 mins in PC Mark’s battery life test that simulates continuous usage until the charge drops below 20 percent. The phone easily clocks in over a day on a single charge. Unsurprisingly, the phone easily lasts for a day on a single charge. On the flip side, the Narzo 30 5G’s 18W fast-charging isn’t fast enough. It takes around an hour to charge the phone from zero to 50 percent.

After using the Narzo 30 5G for a week, I found a couple of areas where it differs from the Realme 8 5G. First up, it has a racing stripe on its back, and the second-biggest differentiator is the blue packaging! Apart from that, it is simply a 6 GB variant of the Realme 8 5G. In fact, these two phones ship with the same clear case.

Overall, the Narzo 30 5G is a mixed mag. For its price, it delivers a good industrial design and 5G makes it future-proof. However, going by its display, camera, gaming performance, I doubt anyone would want to hold onto it until 5G rolls out in India. All things considered, if you are looking to buy a sub 15k phone, go with the Realme 8 that comes with a better display, better performance, and quicker charging.