The OnePlus Buds Pro is the latest flagship audio product from OnePlus, and its most expensive so far. It is brimming with modern features such as active noise cancellation (ANC), programmable pinch controls, wireless charging and more. More importantly, OnePlus has chosen to play in the upper midrange segment, a space it hasn’t ventured into before. The near-Rs 10,000 segment has different dynamics and expectations. Let’s see if these true wireless (TWS) buds live up to those.

The OnePlus Buds Pro’s design is inspired to an extent by the Apple AirPods Pro, but one cannot call it a replica. We got the black variant for review, where the body has a smooth matte finish, and the stems are glossy. The combination does look good, but the stems do attract smudges. Despite the solid build, the buds are light, weighing just 4.35 grams each. The preinstalled mid-sized silicone tips go into the ear canals offering decent passive noise isolation. Two more pairs of tips are included in the bundle to choose from. 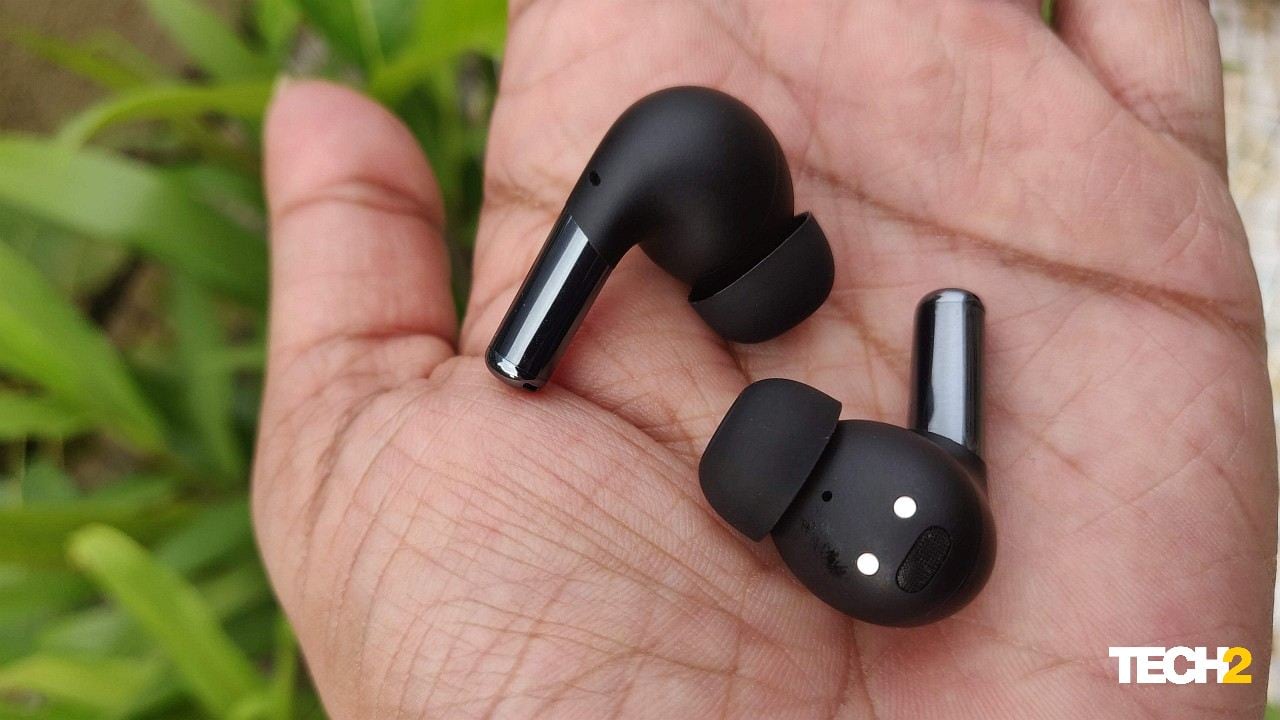 The buds are IP55 rated dust- and sweat-resistant, and even the charging case is IPX4 moisture-resistant. That’s quite unique but also most welcome. The case is well-built, too: it’s easily pocketable and has the same matte finish as the buds with the brand name on top. You get a tiny LED charge indicator at the front and a USB-C port at the back. It hosts a 520 mAh lithium-ion battery and weighs 52 grams. The case also supports Qi-certified wireless charging.

The earbuds fit nicely into the ears and provide good passive noise isolation. I wouldn’t describe the fit as perfect, and while they generally stay in place during jogs or workouts, you need to push them back in or readjust them from time to time. However, they do not cause any discomfort in the ear even after you’ve been wearing them for a few hours. The stems have pressure-sensitive touch controls that are fun to use. More on that in a bit.

Unlike its closest competitor, the Oppo Enco X, OnePlus hasn’t opted for a dual-driver setup with the Buds Pro. Instead, each bud has an 11 mm dynamic driver to handle all frequency ranges. Each bud also has three microphones meant to cut down on wind noise and other unwanted ambient sounds to improve ANC and call quality. They also have wear detection sensors to pause the audio when you remove a bud from your ear, and resume when you put it back in. 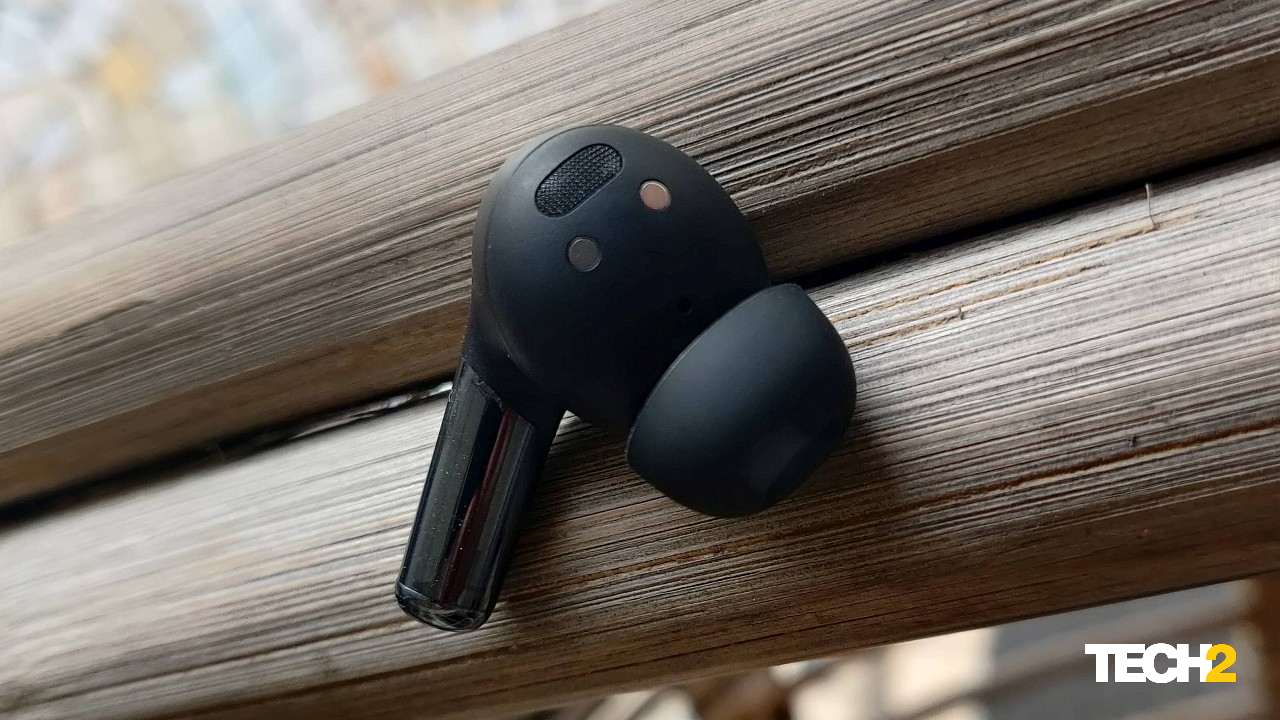 The OnePlus Buds Pro is equipped with wear detection sensors to pause the audio when you remove a bud from your ear. Image: Tech2/Ameya Dalvi

The OnePlus Buds Pro is Bluetooth 5.2-compliant, and supports SBC, AAC and LHDC audio codecs. LHDC is available on few phones, and you will most likely end up using these buds with AAC codecs, like I did for this review. I would have preferred to see aptX or LDAC support instead, but it is what it is. These earbuds do not support normal touch controls but have pressure sensitive controls instead. In simple terms, you need to pinch the stems softly to perform a particular task.

At first it seemed a little odd, but it grows on you quickly and is more enjoyable than standard touch controls. It also eliminates undesired actions due to accidental touches, making this system more practical, too. When you pinch the stems with a small amount of force, you hear a click to inform you that a press has been registered. Different functions are assigned to single/double/triple pinches and pinch + hold. The buds can be configured using the OnePlus Buds app on OnePlus phones (OnePlus 6 or newer) or using the HeyMelody app for non-OnePlus phones. HeyMelody is available on iOS, too.

Strangely, you only get to assign functions for the triple-pinch gesture, and the only choices are either to return to the previous track or use the voice assistant. A single pinch performs the play/pause functions, while a double pinch lets you jump to the next track; it’s the same for both the buds. You cannot change that arrangement; something I did not like. Wonder why they bothered making triple pinch configurable either. In theory, pinch + hold is also configurable, but you only get to choose between the ANC toggles (ANC on, ANC off, Transparency mode). There is no volume control on the buds. 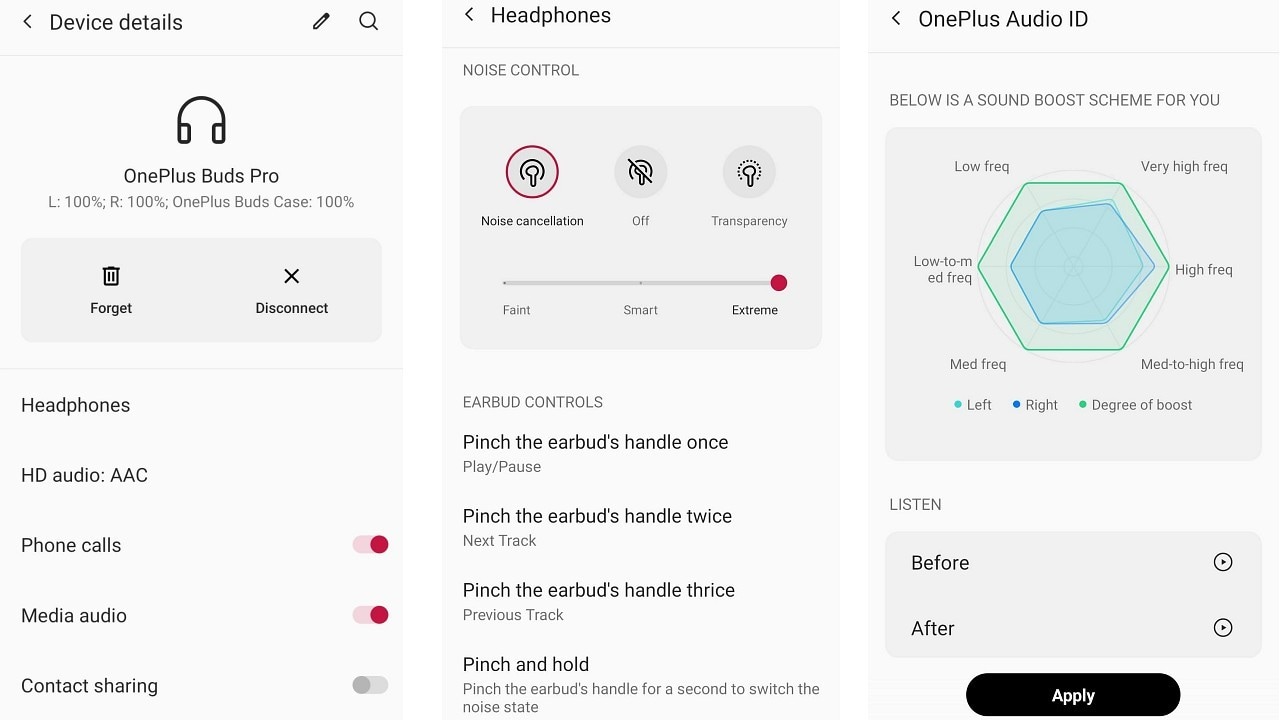 You can choose between three ANC modes in the app; users will also be able to create a unique Audio ID. Image: Tech2

Speaking of ANC, you can choose between three modes from the app – Faint, Extreme and Smart. Faint mode reduces noises by up to 25 dB, while Extreme can go as high as up to 40 dB. Smart is meant to automatically switch between the two modes depending on the quantum of ambient noise to prolong battery life. Frankly, I did not notice any major difference in noise reduction between either of the three modes, so might as well leave it on Smart and let the buds do their thing.

The OnePlus Buds Pro also lets you create your unique Audio ID using a listening test that determines your hearing profile based on your sensitivity to different sounds. This is a feature straight out of Anker/Soundcore’s playbook; however, the implementation isn’t as good. You can certainly give it a shot and see if you enjoy the output better with the Audio ID compared to the default profile. Lastly, you have Zen Mode Air, which plays one of the five white noises of your choice to help you relax or sleep. The chosen white noise is stored on the buds and can be played by pinching and holding either of the buds for a few seconds. Neat little feature, that.

Pairing these earphones with the phone is a standard process. However, you will need to install the HeyMelody app to configure them if you aren’t using a OnePlus 6 or more recent OnePlus phone. In newer OnePlus devices, the preloaded OnePlus Buds app does what HeyMelody can. The connection stays strong for the specified 10 metres with a clear line of sight, and over half of that with a concrete wall in between.

Before we discuss sound quality, let’s touch upon active noise cancellation. All the ANC modes noticeably cut down on several low frequency ambient sounds like the whirr of a fan or the buzz from an AC, and to a great extent even outdoor traffic, though not entirely. The ANC is not in the league of more expensive TWS buds such as the Sony WF-1000XM3, but is more effective than budget buds priced at half or two thirds of its price. Comparing apples to apples, noise cancellation is at par with that of the Oppo Enco X or Soundcore Liberty Air 2 Pro that sell for a similar price.

Sound quality is where things get a little tricky. On a positive note, the OnePlus Buds Pro is one of the loudest pairs of earbuds around, and can get sufficiently loud at 40 percent volume itself. Even outdoors, I rarely had to go beyond 50 percent loudness. I believe the Indian version is blessed with higher decibels than the global version. The sound produced by the Buds Pro is quite enjoyable across various genres of music, thanks to the smartly boosted lows. It is even more enjoyable when watching OTT content on Netflix and Prime Video, and the buds are Dolby Atmos-compliant. I did not face any latency issues either. 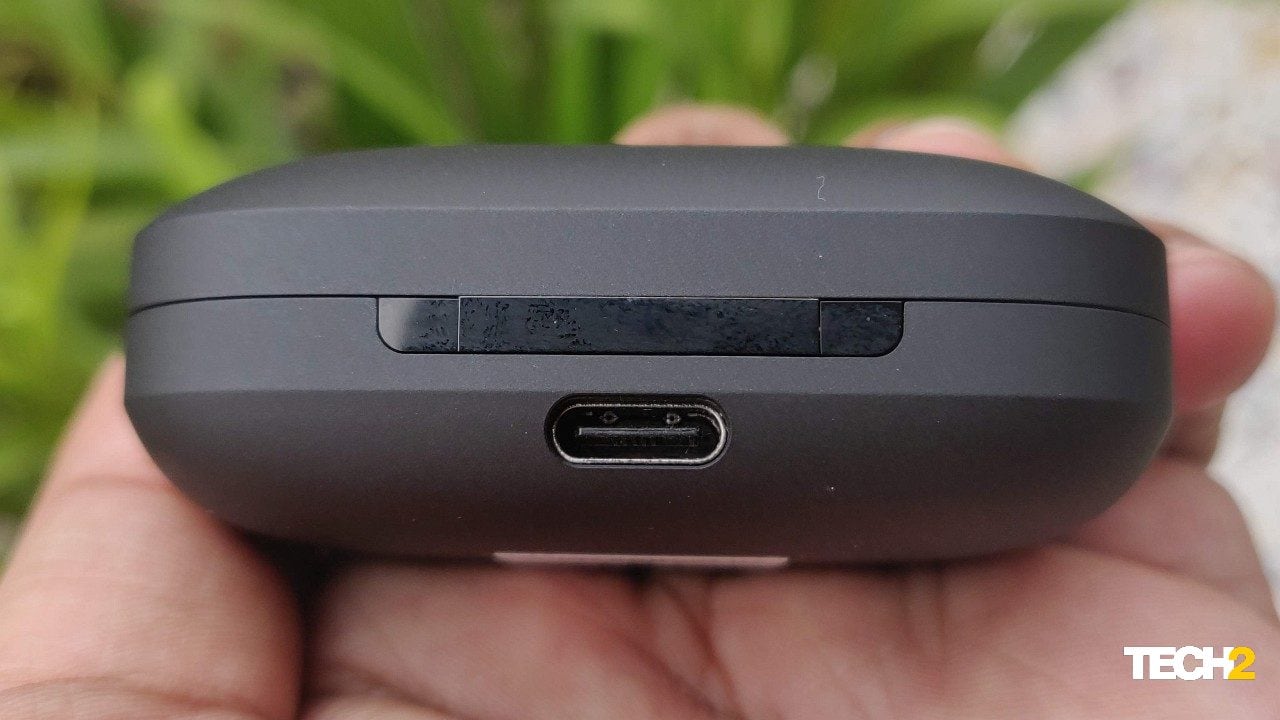 The OnePlus Buds Pro case features an LED charge indicator at the front and a USB-C port at the back. Image: Tech2/Ameya Dalvi

The sound profile here can be broadly classified as V-shaped, given that the lows and highs are boosted. Mind you, the bass boost isn’t like what you get in sub-Rs 3,000 earphones, and is handled smartly, especially the sub-bass. While there is an abundance of bass here, it is mostly tight. The auditory masking is more noticeable in bass-heavy tracks, with the lower end of the midrange spectrum getting suppressed. Vocal clarity is good, but I have heard better in this price bracket.

The highs are quite sharp, and while they do not sound sibilant, they could have been tempered better. You can hear the extra hiss on and off a bit more than you should. The overall detail in sound is decent and imaging is handled well, but the soundstage feels surprisingly crammed for an upper midrange product. So, while the sound is generally enjoyable, it is not as detailed as one would expect from a pair of buds priced at Rs 10,000.

The competition, namely Oppo Enco X and Soundcore Liberty Air 2 Pro, clearly trump the Buds Pro in this department. The former presents you with a lot more resolved detail in sound, thanks to the dual driver setup (along with Dynaudio’s tuning) and better flexibility in configuring touch gestures. The latter offers a more balanced sound, a better in-ear fit and a far superior companion app that lets you tweak the audio in more ways than one, including creating a HearID – a more accurate personal sound profile.

Call quality on the OnePlus Buds Pro is serviceable at best. The person on the line could hear me clearly for the most part but could immediately tell I was using a Bluetooth headset. The wind noise suppression technology needs a bit of a tweak, as the person on the other end could hear wind noise when I stepped out. Interestingly, traffic noise was suppressed quite well.

At my end, the ANC seemed to mellow down during calls as I could hear a lot of ambient noise that was otherwise suppressed when listening to music. I could always hear a soft hiss when calling from a moderately noisy location. It’s probably an issue with the environmental noise suppression algorithm that the company needs to fix with a future update.

The battery backup on the Buds Pro is quite good, though not as high as advertised. With ANC on, the buds lasted a little under four and a half hours, and without ANC, I could push them closer to six hours. The case can recharge the buds about four more times, thus taking total battery backup to between 21 to 29 hours with and without ANC, respectively. That is pretty good battery life for the features the Buds Pro offers. 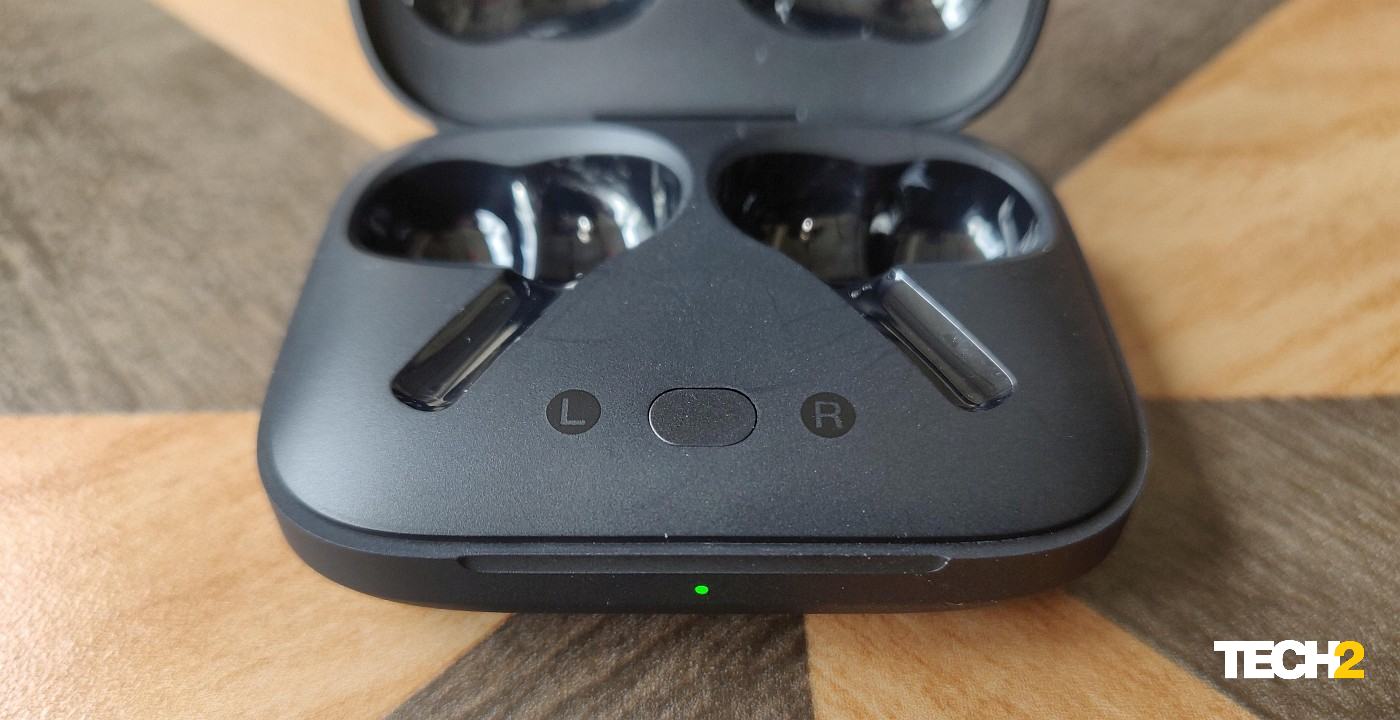 The case has a 520 mAh lithium-ion battery and can recharge the buds about four more times. Image: Tech2/Ameya Dalvi

The OnePlus Buds Pro supports quick charging, and ten minutes of charging gives you close to two hours of play time on the buds with ANC on. Though I didn’t clock it to the last minute, one can charge the case and buds fully in well under an hour. The battery status of each earbud as well as that of the charging case is visible in the OnePlus Buds and HeyMelody apps.

The OnePlus Buds Pro is priced at Rs 9,990 with a one-year warranty, and has been available for purchase since 26 August. Purely on the basis of sound quality, the price seems a bit too high. But this product is loaded with features like good ANC, wireless charging, pinch controls, good battery backup and more. Despite that, I wish OnePlus had priced these buds a couple of thousand rupees lower given the competition. While the Buds Pro is not a bad product at all, the Oppo Enco X that sells for the same price offers noticeably better sound and call quality and more customisable controls, making it our top recommendation under Rs 10,000.