“I think it’s too expensive,” is the most common reaction to the price of the new Hyundai i20 N Line, or for that matter, every range-topping hatchback that moves far beyond the attractive base model price. Maxing out at Rs 11.75 lakh (ex-showroom), the i20 N Line may make you question just how much you want 30 percent extra damping for your ride, when you could have a Mahindra XUV700 for about as much. But more isn’t always better; it just isn’t that simple. If it were, ours would be a market of incredibly cheap and efficient Tempo Travellers. Hyundai thinks it has the right mix of premium and sporty features to warm up the market for a bright future with its new warm hatch. 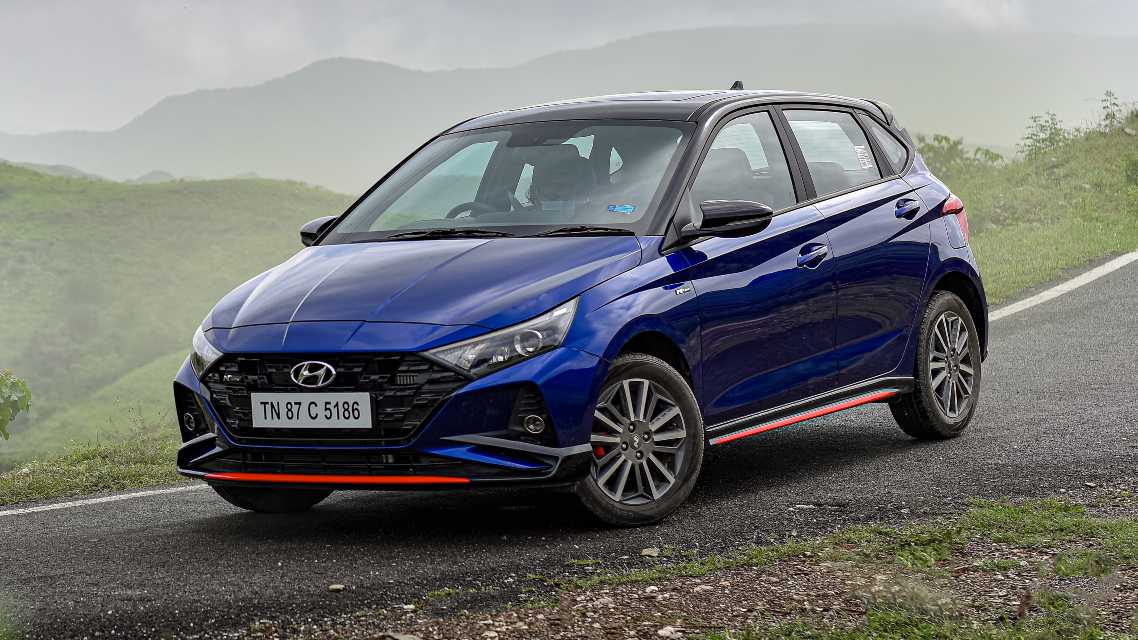 N Line models are a small step-up from standard Hyundais in terms of driving dynamics and have sportier styling elements. Image: Hyundai

The Hyundai i20 N Line is a genuinely sportier i20

On our recent press drive event of the N Line, Hyundai was careful to temper our expectations of the premium hatch. Marketing hyperbole was in check, few tall claims were made and specific details about changes were shared. This review also needs you — the reader — to calm yourself. Yes, Hyundai has had World Rally Championship participation with the i20, and yes, there’s a faint resemblance to its rally car if you squint hard, but this is still an economy hatch as far as the world is concerned. The Korean carmaker has retained the 1.0-litre turbo three-cylinder petrol engine that does duty in the regular i20, and with the same state of tune: 118 hp, 172 Nm. That’s plenty for a little petrol engine, so I won’t consider this a negative. 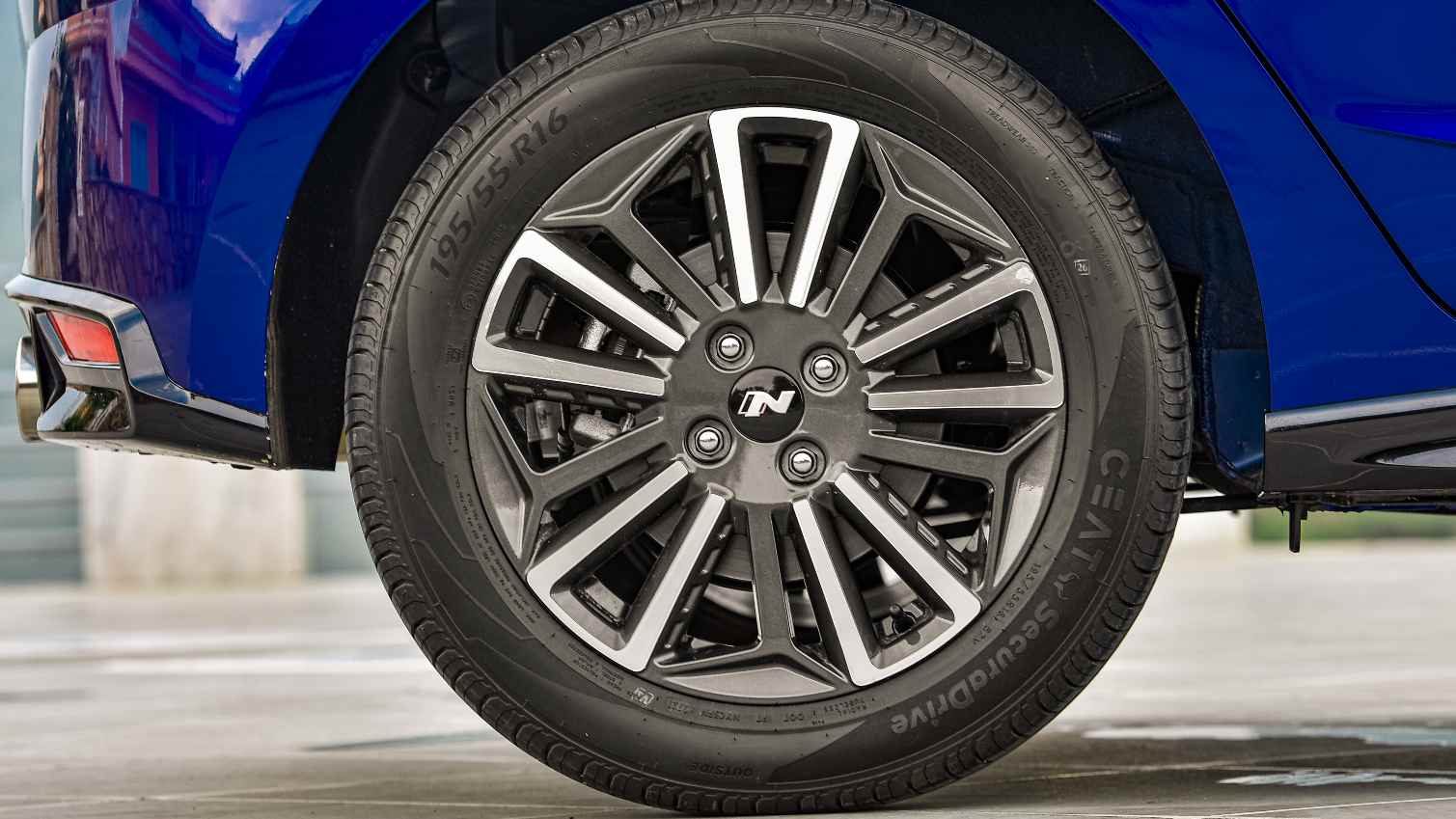 Rear disc brakes are one of the biggest mechanical additions for the i20 N Line. Image: Hyundai

Hyundai counts 27 changes over the regular i20 for the N Line, but the ones that really make a material difference to driving feel and dynamics are disc brakes for all four wheels (lesser i20s have drums at the rear), 30 percent more damping for the suspension, a stiffer steering feel and a fruitier exhaust note with twin tips. There’s also the addition of paddle-shifters for the dual clutch transmission-equipped model, which are unavailable on the standard i20. Then there are the myriad cosmetic touches including dark leatherette seats, contrast stitching, red accents on the bumpers and skirt, spoilers, red calipers and such. They all add up to a surprisingly handsome looking car, without looking extra.

The new N Line is available in three trims, with either a clutch-less manual transmission (iMT), or a full-on dual-clutch automatic (DCT). Prices range between Rs 9.84 lakh and Rs 11.75 lakh (ex-showroom).

A word about tech

Hyundai deserves some recognition for its tech stack. While the Blue Link connected car and infotainment package doesn’t get half the press of its more vocal peers, we’ve found that in practice, voice commands work well and while the UX may not be pretty, it is functional. The companion app is also simple and has the usual complement of features: live location tracking, remote climate control, start/stop, lock/unlock as well as driving stats and trip logs. 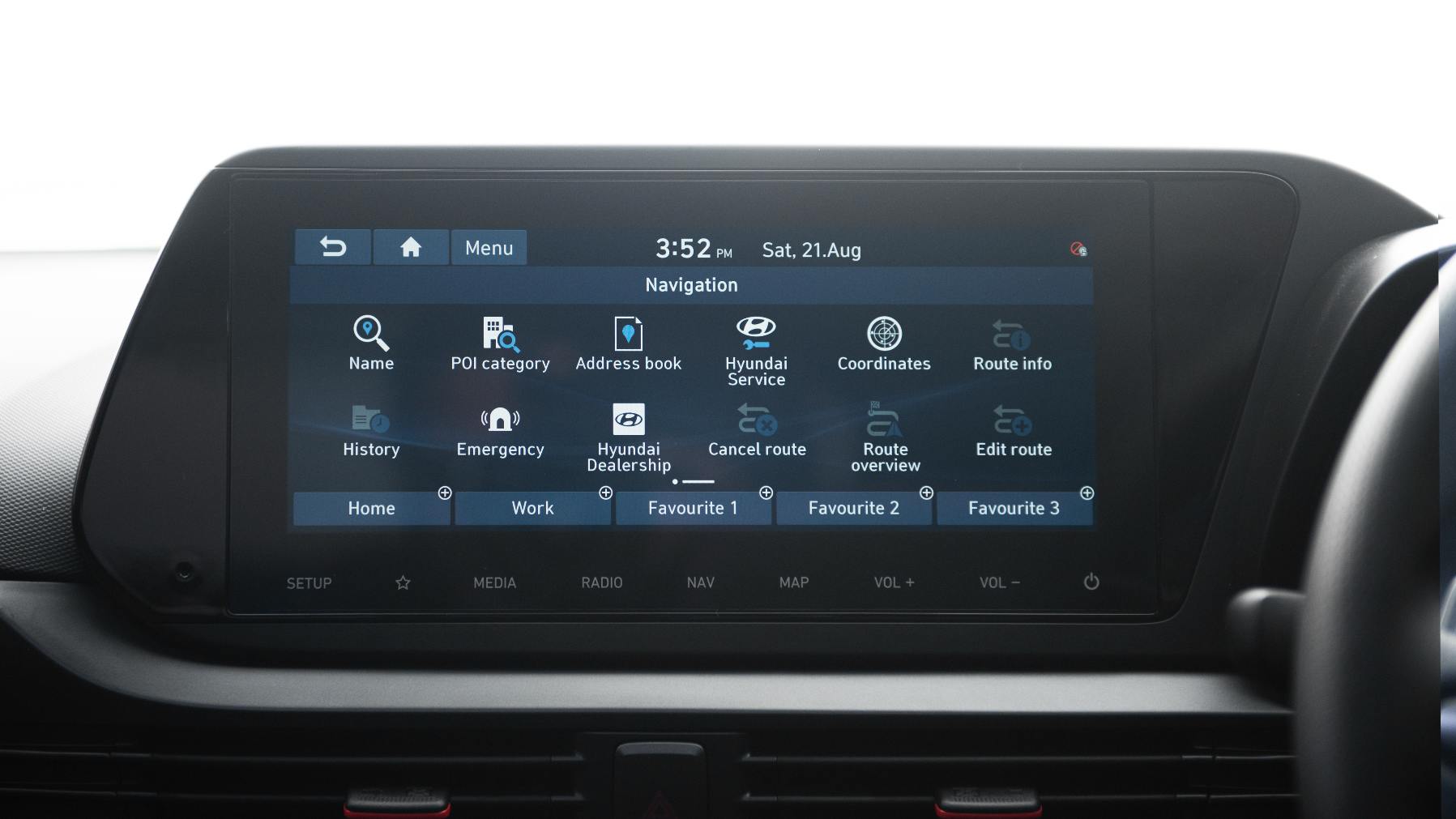 The 10.25-inch screen is legible in all conditions, and works seamlessly. Image: Hyundai

The 10.25-inch touchscreen on the N8 range-topping model is beautiful to look at, and legible in all conditions. However, the UI layout could be better. For instance, when connected to an Apple smartphone via cable (no wireless CarPlay available), the CarPlay interface only takes up a small part of the huge screen, with the rest being used for other notifications and system information. It’s a shame, really. Native navigation is available, if you choose to use it, and it was responsive in our testing; generally, onboard nav systems are poor excuses for maps. Hyundai does better, but it did have some problems tracking our GPS location live.

Music is provided by seven Bose speakers in the top-spec model, and we’re unlikely to hear any complaints about it going into the sales cycle.

Interior: Familiar and practical like the i20, with some pop

As one would expect, the i20 N Line is identical in terms of interior volume to the standard i20 but makes allowances for the boy-racer with a dark theme, N Line-branded leatherette seats, red accents on the dash and unique leather-wrapped gear shifters for both iMT and DCT variants. The seats are rather nice, with great fit and finish for the leatherette. The i20 has always been a capacious hatchback to travel in, and this remains the case with the N Line. Rear legroom is good and three-abreast seating is possible without much discomfort. The boot, at 311 litres, is also practical. 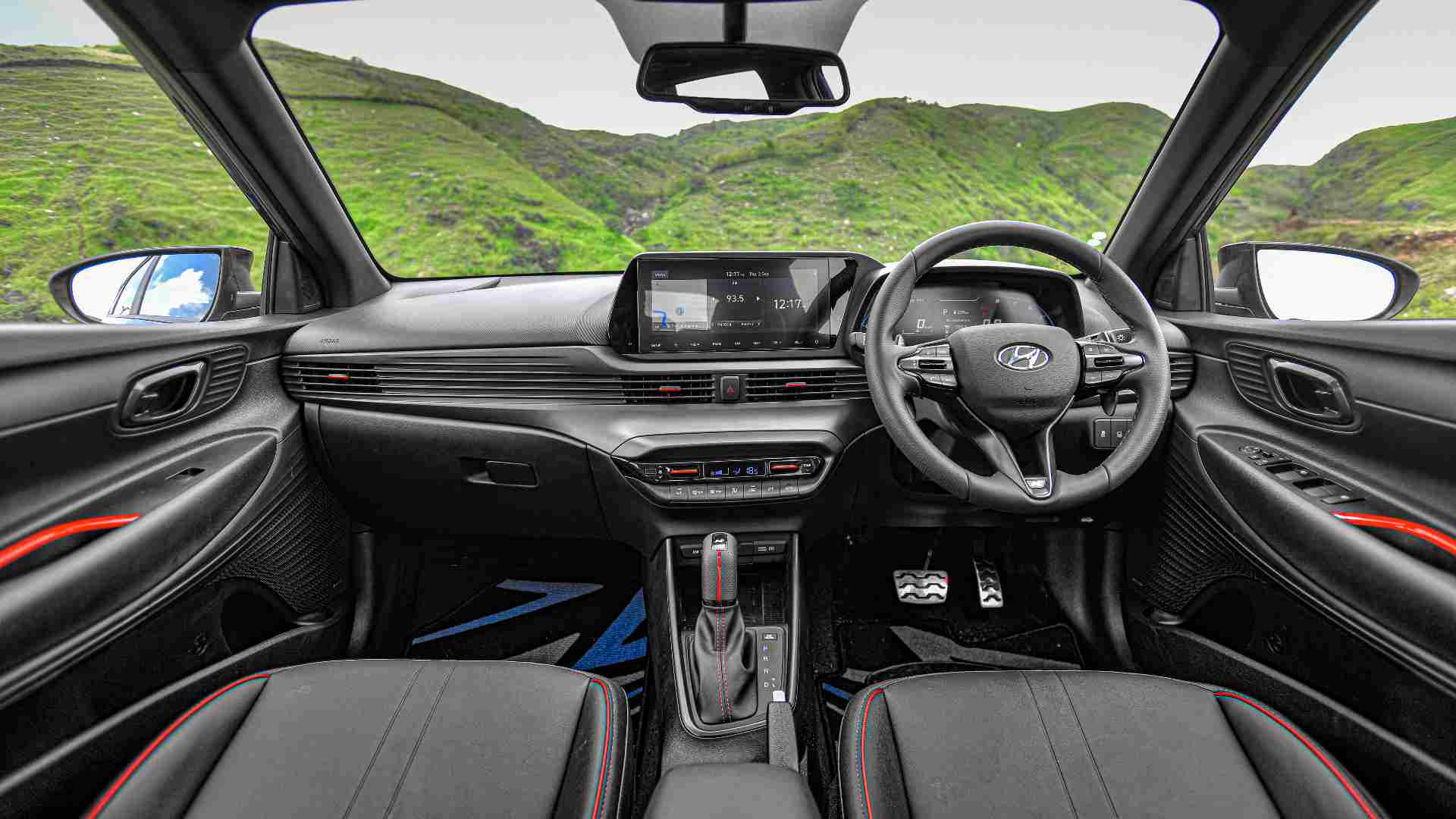 Plastic quality is okay, with textures making up for a light, hollow feel; this seems to be a standard trick by most manufacturers. There are no fabric touches to compensate; it is all plastic, but the red accents provide some visual break. The centre console is dominated by the large, wide 10.25-inch touchscreen. The standard multi-function display in the driver binnacle does feel like a missed opportunity for a TFT screen, but that sounds like a rather costly feature, so we will live with this MFD in favour of the dynamic bits Hyundai has added to the car. In general, the cabin feels elevated beyond that of a typical hatchback and does have a premium vibe.

On the go: Still soft and comfortable, with more feel

Hyundai cars have always had plush suspension and feather-light steering in my experience, but that’s exactly the sort of thing that makes them unsuitable for enthusiastic driving. In essence, this is what the N Line attempts to remedy. While the engine was already acceptable for this sort of vehicle and price range, the N Line takes driving dynamics a notch higher with changes to the suspension, brakes, steering and transmission. These are the only changes of the 27 claimed, that will have a material impact on what the car feels like to drive. 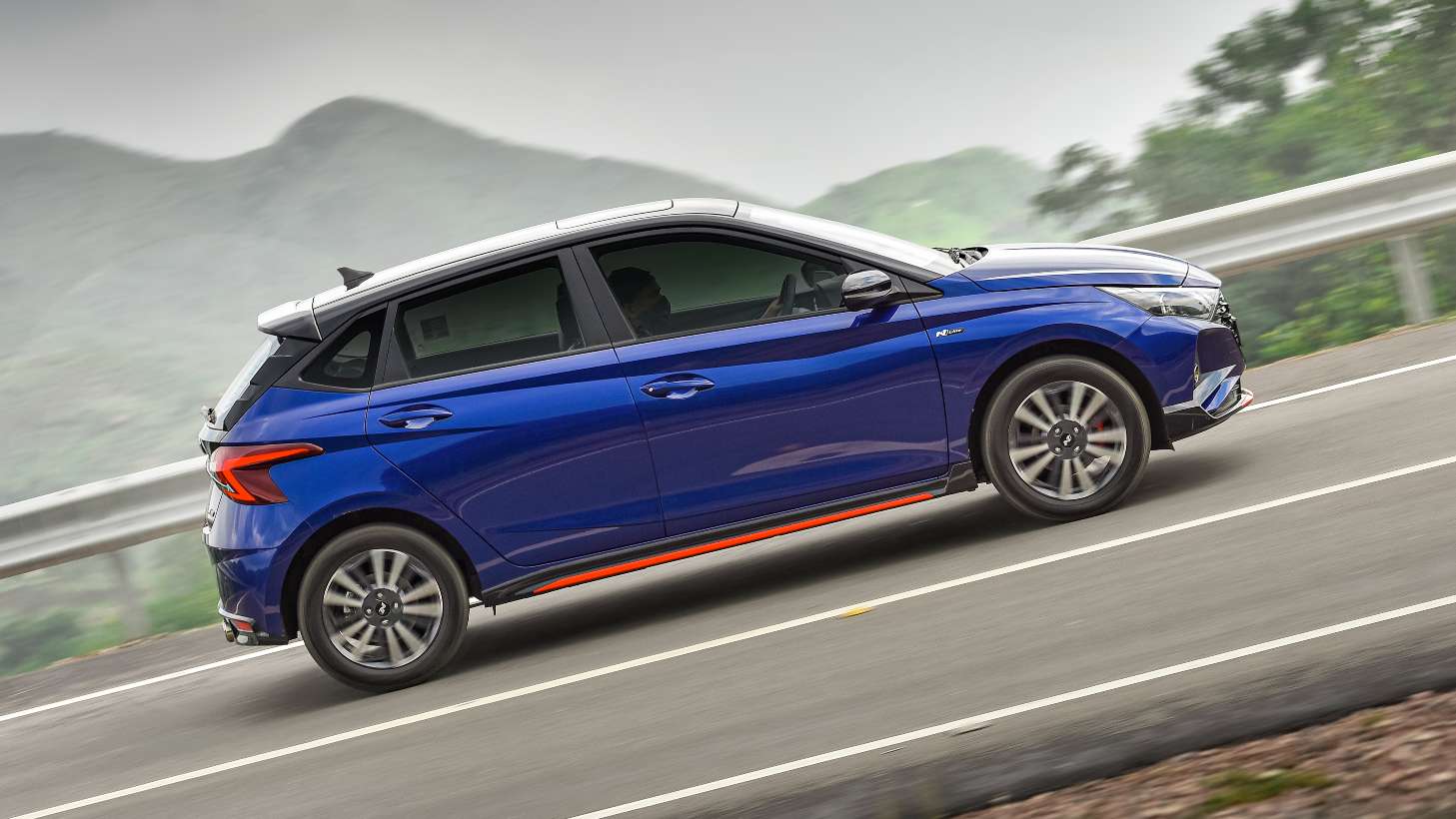 Ride stays admirably flat in the i20 N Line, even over rougher roads. Image: Hyundai

Starting with the suspension, the 30 percent damping increase is a claim that we are unable to test. Does it feel stiffer? Yes, but only slightly. High-speed sweepers saw the car roll a little against my expectations. An average Volkswagen Polo feels stiffer. It handles ably and does not wallow; perhaps that’s the trade-off that’s been made: still soft and comfortable, but flatter in the kinks. We did not experience any thuds or juddering over rougher sections of road, which is admirable.

Four-wheel disc brakes are a relief, and they worked well in our testing. Rajasthan’s highways are full of cattle and stray dogs, and we did have to slam on the brakes on occasion. Stops are without drama, though there is a lack of feel. The brakes are progressive and get the job done. 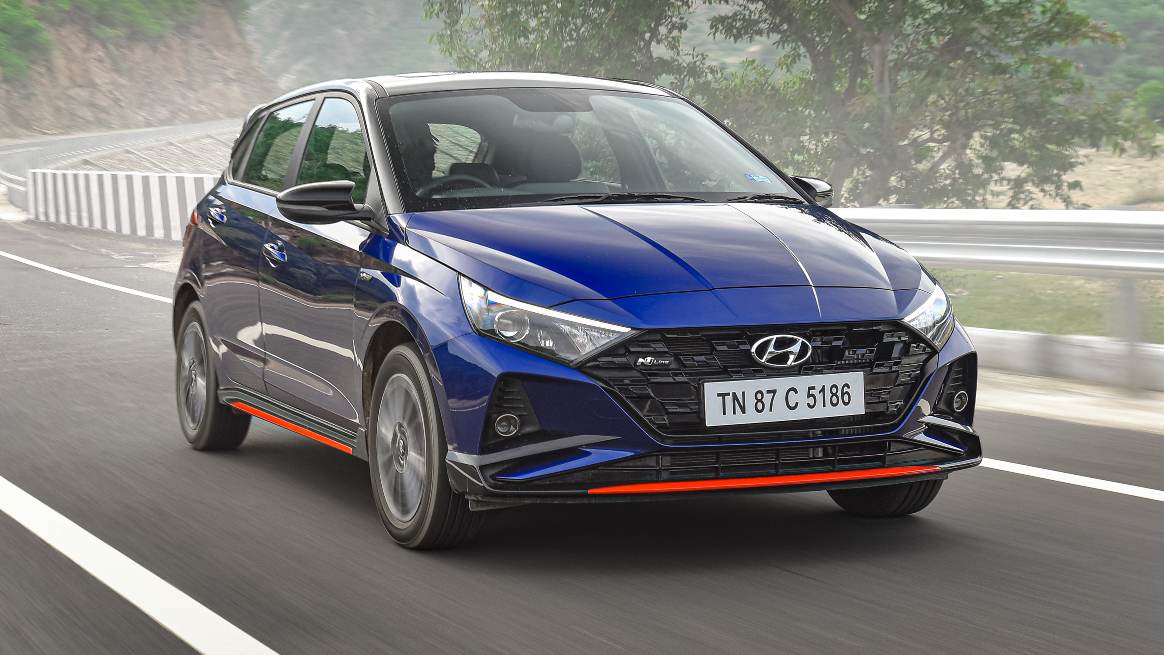 The i20 N Line feels quite confident to till around winding roads thanks to its solid steering feel. Image: Hyundai

Perhaps my favourite feature of the new N Line is the steering feel. Gone is the pinky-finger rotation ability of typical Hyundais, replaced with this solid, stiff steering feel. The car feels quite confident to till around winding roads, though strangely, there’s a lot of ‘dead’ motion near the centre of the wheel position. The flip side is that this does provide great confidence when you’re holding high speeds in the corners. I’ll take this steering over any other in Hyundai India’s lineup.

The DCT transmission is a bit of a hit-or-miss for me. I feel like torque converter automatics have come quite far, while dual-clutch units have either stagnated, or gotten worse. Hyundai’s DCT in the N Line is slow and laggy around town; clearly tuned for comfort and commuting. If you really step on the gas and keep it in ‘Sport’ mode, it tends to hold revs for longer, but that’s about all. Shifts are slow whether done automatically or via the exclusive paddle shifters, and generally don’t feel all that sporty. We did not have a chance to sample the iMT clutch-less manual transmission but were told it can be manipulated with more enthusiasm. Perhaps next time.

The Hyundai i20 N Line is available in three trims: N6 iMT, N8 iMT and N8 DCT. All variants come with a wide complement of safety and convenience features, so one is not left short-changed regardless of choice. Is it a ‘hot hatch’? No, it is warm at best, but far warmer than the competition, of which there is precious little. The Fiat Punto Abarth was a strong contender, but unfortunately, that brand, like so many others in India, has bowed out. The N Line is a fun car to drive, is tastefully decorated and is premium enough that I would have no trouble driving it to work or to an event hosting more swish wheels. At a Rs 50,000 premium over the very top of the standard i20 range, the dynamic aids do make the N Line worth the money. But we are still talking about close to 14 lakh rupees on road for a hatchback. This may sound like stupid money, but at some point, as a market, we will need to move beyond Rs 5 lakh hatchbacks with the bare-minimum feature set. Hyundai appears to be betting its money on a strategy beyond the sub-4m hatchback category. If we are ever to see the i30 or similar, large, premium hatchbacks in the country, we better get used to paying for them.